Sometimes the experts can’t figure it out …

... and that's when you need an intelligent outside viewpoint. Join Jim Hull as he devises unique solutions to everyday problems at the office and in the field . . .

Jim’s book about AI, the future of employment, and more: 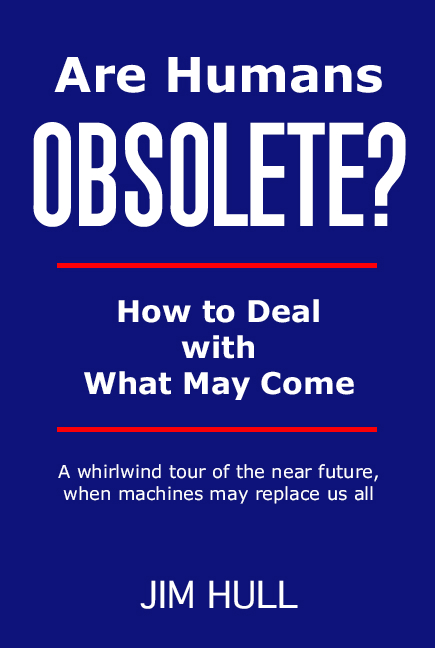 SEARCH for your solution:

How can Uber possibly survive? The private driving service, now a worldwide phenom, faces huge obstacles from taxi cartels, suspicious regulators and anxious voters who wonder: is Uber a good thing or some sort of business conspiracy to make a profit by disrupting the established transportation system?

Granted, Uber’s cheaper, quicker ride service — a car within five minutes and less than $2 per mile instead of roughly $5 for taxis — threatens government-approved taxi operators, who worked hard to obtain their medallions in a restricted market space. Granted, the news has now and then carried garish reports of Uber drivers attacking their passengers. Granted, it takes weeks to certify a taxi driver, while Uber drivers can accept passengers within days. Granted, Uber — and Lyft, Uber’s smaller competitor — threaten a unionized way of life by offering part-time, flex-time work opportunities.

But Uber and Lyft provide a service that’s so compelling, it overcomes all objections:

• Per-mile costs are much cheaper than taxis. One driver I spoke with showed me a couple of typical fares he got, and they both worked out to about $1.50 per mile. Even if the average charge were $2.00 or $2.50 per mile, it would still cost half what an official taxi charges.

• Uber has a business incentive to process applicants efficiently, but its certification requirements are strict. Taxi drivers, meanwhile, must wait weeks because their unions aren’t in a hurry to add new drivers, who push down pay rates. Likewise, government accreditation bureaus rarely have a reason to hurry.

• Once on the job, Uber drivers are continuously rated by their passengers. Any driver whose rating drops below 4 out of 5 is subject to suspension. But the drivers also get to rate the passengers! A difficult Uber user will get bad marks and have trouble finding a ride. Thus everyone involved has an incentive to be polite and cooperative. Try getting that from a taxi service.

• Uber and Lyft offer cheap solutions to congestion, swarming quickly to where they’re needed while reducing the number of private vehicles parked on streets or clogging traffic. The service helps low-income, elderly and disabled users who can’t afford taxis. And passengers give it high marks. Local governments find all this irresistible. Taxi cartels keep losing the arguments.

• The ride-sharing market creates jobs. These days, with a staggering recession in the rear-view mirror and automation horning in on all sides, it’s harder and harder to get a steady full-time job. For the under-employed, Uber and Lyft step in and offer as many hours (or as few) as a worker can handle. The pay isn’t great, and there are no bennies, though with practice drivers can learn tricks of the trade and improve their take-home. But the service offers a flexible way to add to a driver’s bottom line, all the way up to full-time work. It’s hard for politicos to say no to that.

Any one of these makes a compelling argument in favor of the ride-sharing industry. All of them together make it seem unstoppable.

Still, there are pitfalls. Unions and taxi cartels and governments may yet find ways to suppress this nascent marketplace, to pull its monkey wrench back out of the bureaucratic machine.

But the greatest danger may lie within the corporate offices of Uber itself. Its leaders have been accused of arrogance, of flouting the law, and of cutting driver net pay. Reid Hoffman, founder of LinkedIn and a high-tech venture capitalist, believes Uber should tone down its aggressive approach with regulators:

The company tends to be very combative. . . . [Regulators] may be slow to change, they may be risk-averse, but their goal is a mission of protecting society. And so you should interface with them on that channel more than on the ‘Just get out of my way, I’m innovating.’ — Reid Hoffman

Meanwhile, Uber and Lyft have checked off all three main requirements for a successful business in the modern age:

2. Great marketing — Both Uber and Lyft have branded themselves ingeniously, the word-of-mouth is tremendous, and all the media attention gives ride-sharing tons of free publicity.

3. Great fulfillment — The app is easy to use, payment is handled automatically, and the cars are reliable and clean.

Uber may yet shoot itself in the foot and limp off into history. More likely, though, is that the ride-sharing company will be remembered as the front line in a phalanx of businesses — Airbnb, TaskRabbit, Angie’s List — that attack the limitations of an aging corporate infrastructure.

We may be witnessing the decline of the standard 40-hour job, replaced with work that adapts to workers’ schedules, responds quickly to changes in consumer demand, and automatically rewards excellence and civility.

The Uber/Lyft revolution is hurtling toward us like a fleet of rebellious vehicles, and in each car sits … the future.

UPDATE: How Uber got a city council to back off

Jim Hull graduated from UC Santa Cruz with a degree in philosophy, then spent ten years as a lecture-demonstrator in the performing arts, including tours and TV appearances. More recently, Jim has produced research, copywriting, and editing for numerous clients. He also has published two books: the set of essays ARE HUMANS OBSOLETE? and a novel, THE VAMPIRE IN FREE FALL. Jim teaches classes in current events and music at The Braille Institute in Los Angeles. He applies his unique perspective to create surprising, compelling solutions to difficult problems. Jim thinks the world would work better if people spent less time dominating each other and more time working alongside those with different viewpoints to resolve the challenges we all face. CONTACT JIM: jimhull@jimhull.com ... View all posts by Jim Hull

Leave a Reply! (Then click the "Notify me..." button to stay in the conversation!) Cancel reply